Devastating. Apocalyptic. Those are words you don’t want to hear when you think of anything, really, much less Italy’s most famous olive-producing regions.

But those adjectives are being uttered by Salento farmers in Italy’s southern boot now faced with a blight that’s desiccating their olive groves. The cause is a bacterium, Xylella fastidiosa, credited with killing at least 1 million trees so far. Dread of the disease’s spread has roiled Europe, as families who have manufactured olive oil for generations now fear ruin. Officials are trying to quarantine the outbreak before it leaps toward other olive-producing nations, like Spain.   —Diane Richard, writer, May 13 *Image: Davide Monteleone for *The New York Times Source: Jim Yardley, “Fear of Ruin as Disease Takes Hold of Italy’s Olive Trees,” The New York Times, May 11, 2015 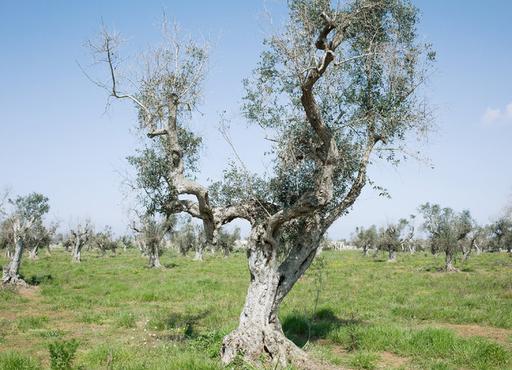