January 2, 2019—Artist Thomas Sully made this painting of George Washington based on portraits of the nation’s first president by another artist, Gilbert Stuart. Sully copied Stuart’s portraits to meet the demand for Washington’s likeness in government buildings and other hallowed halls.

Recently, retiring Governor Mark Dayton named a Minnesota-based artist to paint his official portrait. When completed, the portrait by Paul Oxborough, of Excelsior, will join 38 other depictions of governors hanging in the Capitol. Gov. Dayton wasn’t initially too keen on the notion of being immortalized, telling an MPR reporter: “If somebody in the future decides they want to do a portrait of me I will send them a Polaroid snapshot and they can do so.” Eventually, he came around. (p.s. The Daytons are longtime Mia benefactors. Case in point: this portrait gazes over, yes, the Bruce B. Dayton Rotunda—named for Gov. Dayton’s dad.) 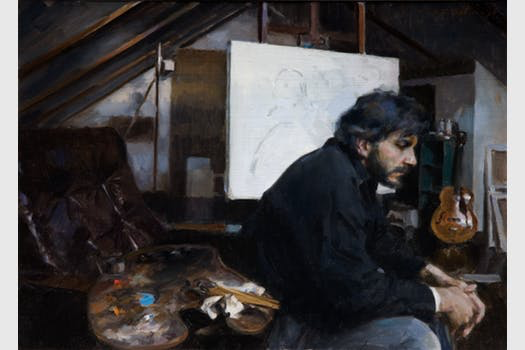