July 12, 2018—The English soccer team (whose jerseys sport a crest featuring three lions that dates to the 11th century) might have benefited from just one more ball-playing lion—perhaps this glazed earthenware feline?—in its match against Croatia in the World Cup semi-finals.

Zounds! Croatia defeated England 2-1, clinching the final spot in the final against France. English fans had hoped to see the finals for the first time since 1966. But Croatia sent the game into overtime with an equalizing goal at 68 minutes and a second game-winning goal at 109 minutes. This is the first time the relatively young nation that gained independence in 1991 will play in a World Cup final. With a population just shy of 4.2 million, Croatia will also be the second smallest nation to play in the final, behind Uruguay, which won in 1930 and 1950. Which team is your pick to win: France or Croatia? 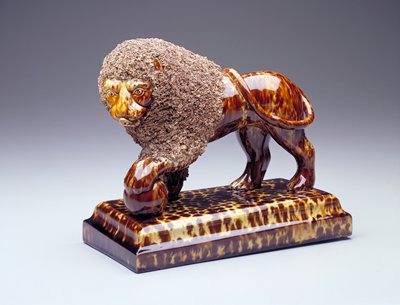