In death, a united vision?

May 10, 2017—This manuscript box combines imagery from both Buddhist and Hindu legends. So, too, will the funeral preparations for the king of Thailand.

Construction of a vast cremation pyre in Bangkok is now in progress. Built to represent Mount Meru, the center of the Hindu universe, it will embody the highest of Thai arts and architecture. In this mostly Buddhist nation, beliefs about the monarchy draw from Buddhism and Hindu mythology. Buddhist monks will chant at the funeral, but the cremation will be Hindu. The monarch, King Bhumibol, or Rama IX, whom many hold as divine, died at age 88 last October. 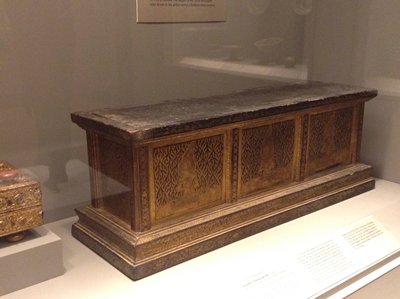