In the 1600s, a renewed interest in ivory carving emerged thanks to new maritime routes along the east and west coasts of Africa.

The baroque style, so called for its dramatic, elaborate effects, coincided with this ivory influx, providing European artists with a medium suited for the style of the day. Many began using ivory in extravagant church interiors and to create expressive sculptures, like this one of St. Jerome. The skill of ivory carving became so popular that, in central Europe and the Netherlands, court positions were created for sculptors who specialized in ivory.     — Gretchen Halverson, Media and Technology Assistant, January 18, 2017 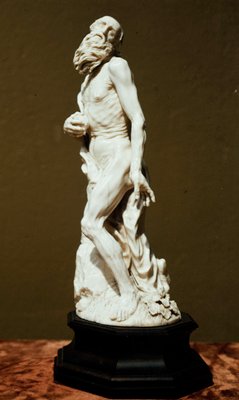