An eye for turbulence?

Vincent Van Gogh knew something about turbulence, the chaos of his mind at certain times in his life. Did this help him understand the nature of turbulence in the atmosphere? Scientists recently discovered that the turbulence in our starry skies consists of large and small eddies of air—swirls not unlike those in Van Gogh’s Starry Night and other paintings.

While many artists in Van Gogh’s day were presenting luminence in their Impressionist works, Van Gogh was mastering turbulence, two sides of the same coin. This would suggest that he wasn’t crazy but misunderstood. Thank goodness he was allowed to paint, and his paintings preserved until now, when we can begin to understand them. 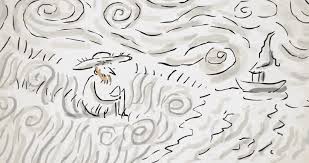